Last year at this time, I was in a photography class out at the Career Center. We had a lot of nice equipment out there– Canon EOS Rebel XTi’s, a portrait studio with professional studio flash equipment, snazzy tripods, reflectors, light metering equipment, and more (we also used old-school film cameras and developed our own film in the darkrooms). As an individual who is becoming increasingly interested in photography, I recently looked over my arsenal of photography stuffs and noticed that a few things were missing…

Seeing as I won’t be getting a DSLR anytime soon, I decided to upgrade my flash equipment and buy a new tripod.

The camera I’m currently using in my photo rig, a Kodak Z8612IS, does not have a hot-shoe mount or any proprietary mounts for external flash devices. Because of this, I can’t use an external dedicated flash with my camera. Instead, I have to use a slave flash– a flash that is activated by the on-camera flash. I purchased one off of Amazon.com yesterday, and when it’s attached to the camera with a flash bracket, it will look something like this:

Note: This is not my camera, just an example of what the slave flash will look like when attached to a camera.

The flash can also be placed on a separate tripod to provide fill-lighting in other areas. I also purchased a softbox diffuser for this flash, and it looks something like this:

An example of a softbox attached to an external flash.

Both the softbox and the slave flash are a much needed lighting upgrade, especially for studio and dark lighting setups.

Tripods are essential for most situations in photography. They allow photographers to shoot in low-light situations without getting motion blur. I’ve been using a Nikon tripod for the past several months. While it does manage to do the basic task of holding the camera steady fairly well, it’s a bit shorter than I prefer. It also has thin legs and no levels on-board. I decided to go out an upgrade my tripod with this:

The silver tripod is the new Targus tripod; the black tripod is my old Nikon tripod. There's a significant height difference when both are fully extended. 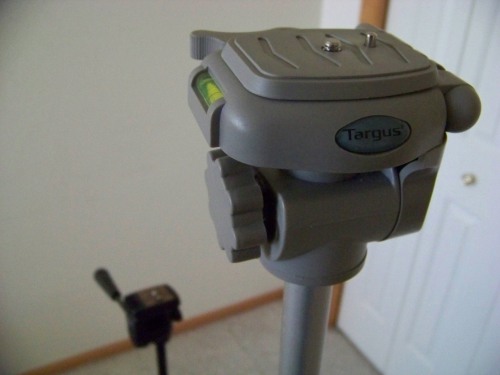 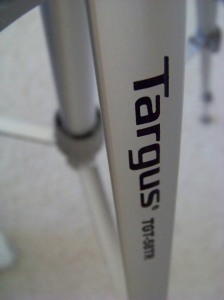 The tripod also came with a carrying case… Check it out:

I’m thinking of buying more flash add-ons later, but I think these should work well for now. Hopefully my next equipment upgrade will be something more like a DSLR… or at least a micro four-thirds camera. 😛

This entry was posted in The Seniors' Perspective, Uncategorized. Bookmark the permalink.